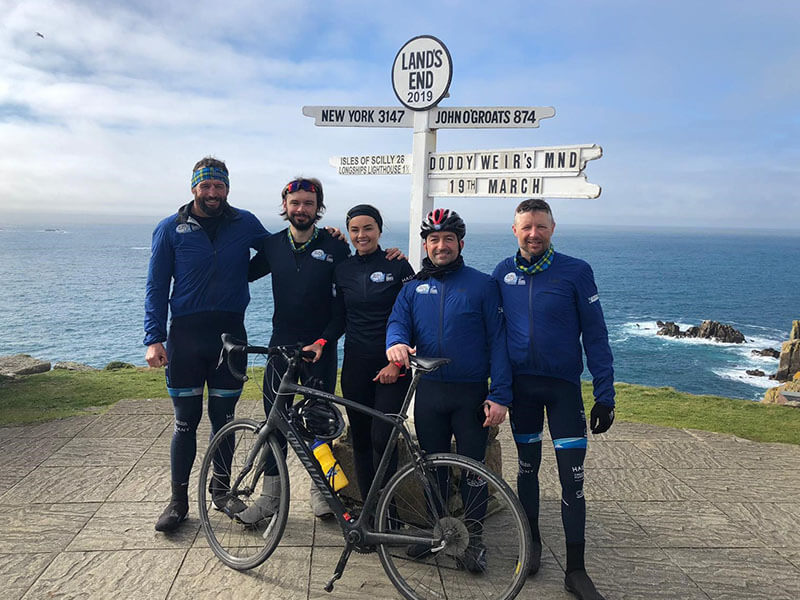 Nine cyclists arrived in John O’Groats on Sunday 3rd March ready to start the ride the following morning. The weather for that time of the year was on our side for the first two days, with some wind and rain but thankfully no snow.

The same could not be said for day three. We headed off from Aviemore in dry but windy conditions, being joined by Gordon & Alan Bulloch, but as we climbed to the highest point, The Pass of Drumochter, the snow and rain did not help morale, but we battled on for some warmth at The House of Bruar before staying over in Dunkeld.

Graeme Beveridge joined us in Dunkeld, as we continued onwards to Edinburgh via Dalmahoy Hotel & Country Club and BT Murrayfield Stadium, just in time to host a Gen!us beer live rugby quiz and a players Q&A at Stewarts Melville RFC. Scotland head coach, Gregor Townsend found time out of his busy schedule to sit alongside Bryan Redpath, Carl Hayman and Ollie Phillips to answers questions from Bruce Atchison.

The team were joined in Edinburgh by Jason Oakes and Graham Shiel with Rob Wainwright & Mark Beaumont also assisting us out of Edinburgh who were ‘training’ for their 500 mile challenge the following week. The peloton crossed the border into England later that afternoon before resting up in Berwick ready for the tough few days ahead.

Berwick into Newcastle with a side wind, enabled the team to get to Newcastle just in time to watch the Scotland v Wales match, and fuel up for the biggest challenge to date on the cycle. The Newcastle to Leeds section was always billed as the turning point of the cycle. Shaun Longstaff & Kiko Matthews joined the group for the 111 miles and 2500 metres of climbs, in rain, wind, snow & sleet. 10 hours in the saddle we finally arrived at Leeds Rugby long after dark. Thankfully the next days ride we only had the wind to battle against but still a tough ride into Nottingham where Gary Rees joined for the day. Storm Gareth met us in Nottingham! The start was delayed until 10.30am due to torrential rain, but after a brief discussion, we headed off making a plan of getting to Leicester then onto Northampton. Dean Ryan, Matthew Tait and Dom Barrell all joined here, and I am sure they regretted this decision when after 2 hours of cycling no-one could feel their hands or toes. Colin Deans waited patiently for the peloton at Northampton, where Bryan Redpath needed some physio attention on his knee and ankle, before getting us to our hotel to warm up.

Iwan Tukalo re-joined the group here for the final days of the cycle. As we headed out of Northampton, Dylan Hartley and some Northampton Saints players came to make sure we left the ground safely before cycling into Reading, where an essential laundry stop was the ‘entertainment’ of the day. We set off from Reading with Damian Cronin and Peter Winterbottom in toe as the bright but windy morning turned into rain for the final 20 miles into Richmond.

We held another Gen!us beer live rugby quiz, hosted by Ugo Monye and Scott Hastings at the Shack 68 in Twickenham on the Thursday night before hosting a golf event at Royal Mid-Surrey on the Friday morning. Martin Bayfield was the MC for the golf, and he was joined by Tim Visser, Matt Dawson, Thom & Max Evans, Craig Chalmers, Paul Doran-Jones, Tom May, Damian Cronin, Scott Hastings, Ollie Phillips & Peter Winterbottom.

Damian supported the peloton again on the Saturday morning and was a fantastic wind break for the long ride into Winchester arriving in time to watch Scotland & England play out a great game of rugby.

The last three days we were told would be long and ‘bumpy’ and boy were they not wrong. Phil De Glanville had the shortest leg ever when his gears failed and had to push his bike one mile back to the hotel! Some beautiful scenery, seriously long and hard climbs with wind, but no rain saw the peloton finally arrive at their end destination of Land’s End at 3.30pm on Tuesday 19th March.

The ‘Famous Five’ who completed the whole distance were:

• All Black legend with 45 New Zealand caps, Carl Hayman.
• Andrew Conway, the only real ‘cyclist’ in the group who had recently cycled from Land’s End to John O’Groats in 4 days.
• Miss Northern Ireland 2012, Tiffany Brien.
• Ex-Scotland captain with 60 Scotland caps, Bryan Redpath.
• Stuart Thom, the organiser of the event.