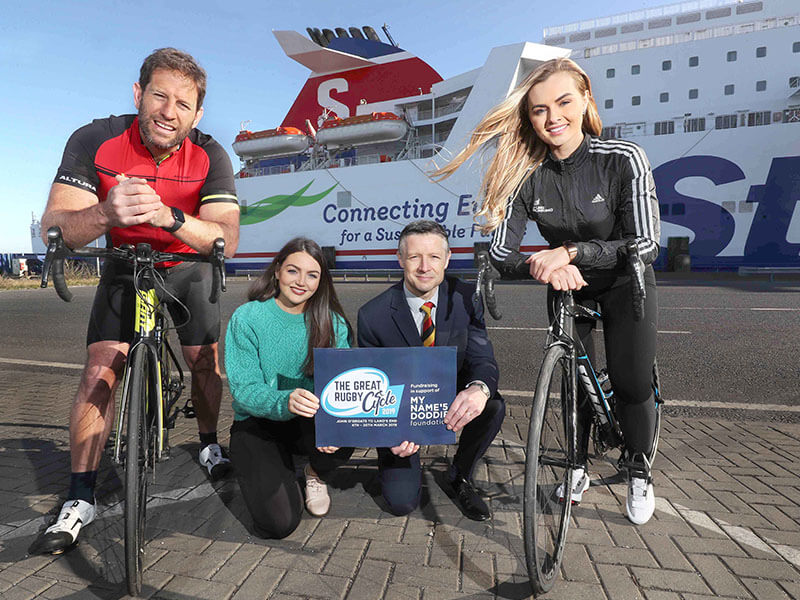 Leading ferry company Stena Line has just confirmed its support for the 2019 Great Rugby Cycle, a 16-day charity cycle ride from John O’Groats to Land’s End (4 – 20 March) in aid of the My Name’5 Doddie Foundation.

The Foundation was launched in Nov 2017 after Doddie Weir, the former Scotland and British & Irish Lion international revealed he was suffering from Motor Neurone Disease (MND).  The aims of the Foundation are to raise funds to aid research into the Causes of MND and investigate potential cures and well as providing support for those affected by the debilitating disease.

Stena Line will be helping to transport fundraisers from Northern Ireland to the start of the 1 238 miles charity cycle including former Miss Northern Ireland Tiffany Brien and former Scotland and Ulster Rugby star Simon Danielli.

Orla Noonan, Stena Line’s Travel Commercial Manager (Irish Sea North) said: “We are delighted to lend our support to this very worthwhile fundraising event.  MND is a progressive, highly debilitating condition with no known cure at present so we are pleased to support the fundraising efforts of The Great Rugby Cycle team and wish all of the riders and their numerous supporters along the way the very best of luck.”

Stuart Thom, Chair of The Great Rugby Cycle Charity said: “We are proud to welcome Stena Line onboard our ambitious fundraising programme in aid of the My Name’5 Doddie Foundation.  In addition to the challenging 1 238 cycle ride, which will be completed by myself and six other cyclists, we have staged a number of fundraising events along the 16-day route from pub quizzes to celebrity golf events which have been generously supported by the wider rugby family as well as those just interested in helping to find a cure for MND.

“We have set ourselves an ambitious fundraising target of £100k. We plan to extend the charity cycle ride next year to include a trip round Ireland and in 2021 across South Africa to mark the 24th anniversary of the British & Irish Lions successful 1997 tour, which Doddie made such a valuable contribution to.  Finally, if you would like to join our cycle peloton from Edinburgh to Land’s End, which will be fully supported and serviced along the way or just wish to make a donation please visit https://doddie5-ride.co.uk/the-great-rugby-cycle for more details”, concluded Stuart.

Stena Line is the largest ferry operator on the Irish Sea, offering the biggest fleet and the widest choice of routes between Britain to Ireland including Belfast to Liverpool and Heysham, Belfast to Cairnryan, Dublin to Holyhead and Rosslare to Fishguard routes, a total of 232 weekly sailing options between Britain and Ireland. Stena Line also offers a direct service from Rosslare to Cherbourg with three return crossings a week.